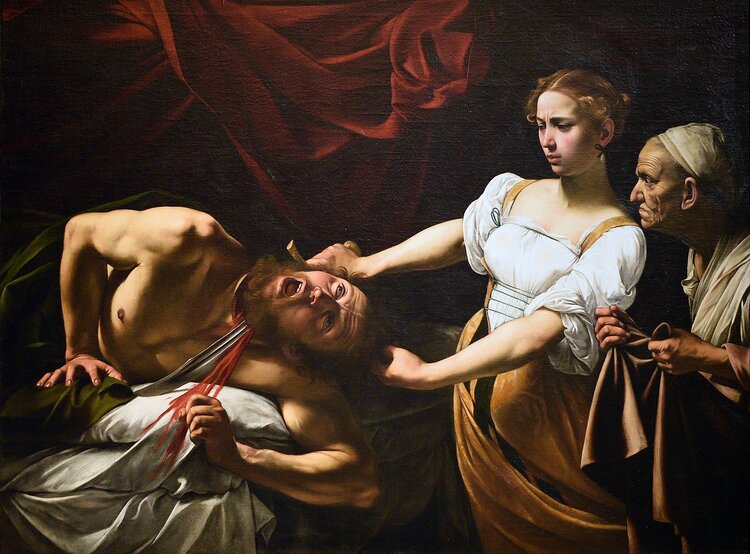 Some of you in the UK may have visited the National Gallery to see the Artemisia Gentileschi exhibition before Covid shut it down. If you did, I expect one painting that may have impressed you is her Judith and Holofernes from around 1620. Interestingly, this violent scene of this particular woman beheading this particular man had been a popular subject for artist through the centuries, not least the 16th when it was covered by, among others, Vasari, Cranach the Elder, Donatello, Giorgione and Caravaggio. It is Caravaggio’s version I urge you to look at today.

As outlined in the Book of Judith, Holofernes was the leader of an Assyrian Army in the 6th century BC who attempted to conquer Israel. Judith, a fair young widow, took it into her own hands to save the besieged town of Bethulia (possibly modern Meselieh in the Palestinian West Bank) by donning fine clothes, gaining access to his tent and filling the foolish soldier with wine. When the opportunity offered itself, she drew a sword and cut off his head. As a result of this murder, Israel was saved. By killing him, she prevented the Jewish people from having to worship the Assyrian king Nebuchadnezzar. Thus, her act kept her people on the path of the one true God.

Such a narrative was highly topical at the time of Caravaggio. Repressing heresy and regaining control were central to Papal thought at this time, known as the Counter-Reformation. The Church had lost various territories including England and parts of Germany and France, who were rejecting the authority of Rome – and its taxes. The Church had decided to fight back.

By the latter half of the 16th century, the Church had militarised in order to reclaim what it felt was rightly its own. Religious orders like the Jesuits went out to convert – or kill. Even monarchs feared for their lives. Elizabeth I of England survived multiple assassination attempts; others were not so lucky. Judith became a torchbearer for such violent demonstrations of renewed Catholic dogmatism.

The era of the rebuilding of Rome – as we will see in our soon-to-be-released film on Raphael – was a direct product of this Counter-Revolution. The Popes were determined to show the renewed glories of the Catholic Church; they positioned themselves as the true heirs of the Roman Empire, a Christian Empire.

A young Michelangelo Merisi da Caravaggio arrived in Rome at this time. He was but a jobbing artist until his mid-20s, and then a painter of semi-nude boys for a cardinal who liked the company of young men. He started to be noticed and left the cardinal’s palace to get bigger commissions. In 1599 he was asked to paint this. The money was one thing, kudos another, but the drama and subtexts clearly appealed.

Here was a chance for an artist to depict beauty, horror and drama on a surface level, and the Church’s message at a deeper level. Caravaggio shows the moment of death – the shock, the scream, Judith’s own revulsion at what she has to do, alongside her maid’s similarly appalled gaze. It is all too realistic – and it is likely Caravaggio had been to at least one of the many decapitations that happened in Rome. This method of execution was a relatively frequent form of legal punishment in the papal State – with the heads then hung from the Castel Sant’Angelo. If there was already one thing that appealed to Caravaggio, it was pushing at the limits of how dramatic, horrific and affecting a painting could be.

One thing he did not do was paint Judith nude, as others before him had done. Caravaggio probably knew other artists were using the story to display their ability to paint the human form, but I think he was more interested in probing the reality of a situation. Indeed he is known for having used ‘ordinary’ people as models. It has been suggested that his model for Judith was his mistress or a local prostitute. One wonders if Holofernes is perhaps a self-portrait. So we have these many possible layers upon layers of meaning and insinuation… It is a truly fascinating work of art.