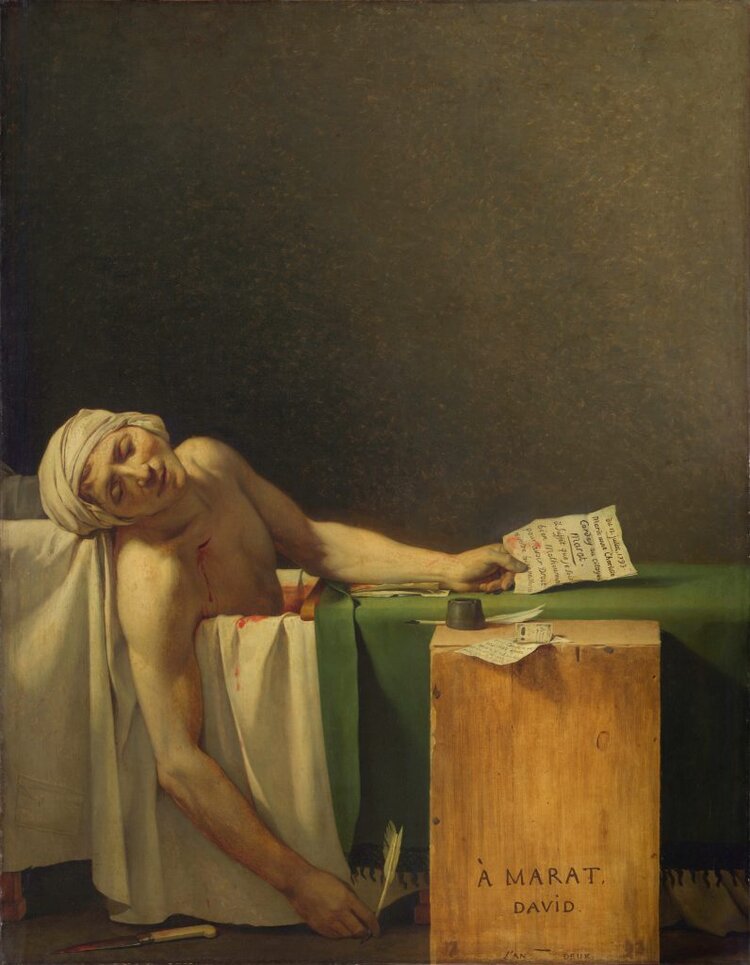 THE DEATH OF MARAT

Some time ago, when we were making the series Great Artists, one of the episodes focussed on the French artist Jacques-Louis David. I’d first become aware of him when making an earlier film about Napoleon due to his 1800-1801 painting Napoleon Crossing the Alps, which is as fine a piece of propaganda as you’ll ever see. Where there was, in fact, a mule, here you see a fine stallion. I became interested in the artist – and what a life story he has.

What an extraordinary time that was to be a leading establishment painter in France. David straddled the revolution and then the rise and fall of Napoleon Bonaparte. Next time you are able to visit the Louvre, seek out his works: they are monumental in so many ways. But it’s actually a painting now in Brussels (although a decent copy by Serangeli is also at the Louvre) from 1793 that is the subject of this latest brief commentary. It is called The Death of Marat.

It is an archetypical history painting – indeed, it shows an actual event and was painted in the days and weeks after it happened. It is perhaps the most famous painting of the French revolution.

So first, the history: the French Revolution of 1789 was a bloody affair and its violence increased and spread throughout the early 1790s. Joseph Guillotine’s invention was but one example of the torture and death that accompanied the fall of the monarchy and the chaos that ensued. Born in 1748, Jacques-Louis David had a wealthy upbringing, despite his father having died as a result of a duel when Jacques-Louis was 9. Notwithstanding that, by his early 50s and the height of revolution, he had become an ardent rebel, part of a group called the Jacobins that included Danton and Robespierre. During what is known, for good reason, as ‘The Terror’, one of David’s friends, the publisher, journalist and politician Jean-Paul Marat was murdered by a female assassin, Charlotte Corday. Murdered, as you can see, in his bath – with Corday’s letter of introduction in his hands. She later claimed that she blamed Marat for countless deaths and killing him was killing one man to save 100,000. David, on the other hand, held him in great esteem, thinking him a great speaker and thinker. David had been in that very room only 24 hours earlier – the room where his friend is now depicted taking his last breath.

It is thus a painting of a murder that has just happened, a raw painting, the vulnerability of someone in their bath being stabbed to death, almost Christ-like at a time when religion had been banned, with the open gash visible to all. Marat apparently was in his bath because the cold water eased a terrible itchy skin disease that he suffered from. Perhaps Corday knew that Marat would be bathing and helpless – but it still feels a brutal and defenceless way to die. Although the knife is on the floor, in reality it was left in his chest, and Corday herself did not apparently try to flee – though David chooses not to paint her in the scene.

The painting thus has all the drama of a great novel and it is fascinating historically. But as an artwork? Well, actually I think this neo-classical work is indeed a very fine painting. There is something of Michelangelo about it. The composition, the detail, the drama, the lighting… all are highly skilled and exemplary storytelling. It may not be accurate – no unsightly skin rashes on view for example – but it tells a gripping story with great craft.

By 1794 the Jacobins themselves were on the run – David only just survived by renouncing his association with them and, having been imprisoned in the Louvre (the former royal palace), was fortunate that his skills as a painter were recognised by a young Corsican army general by the name of Napoleon Bonaparte. He was released and the rest, as they say, is history.