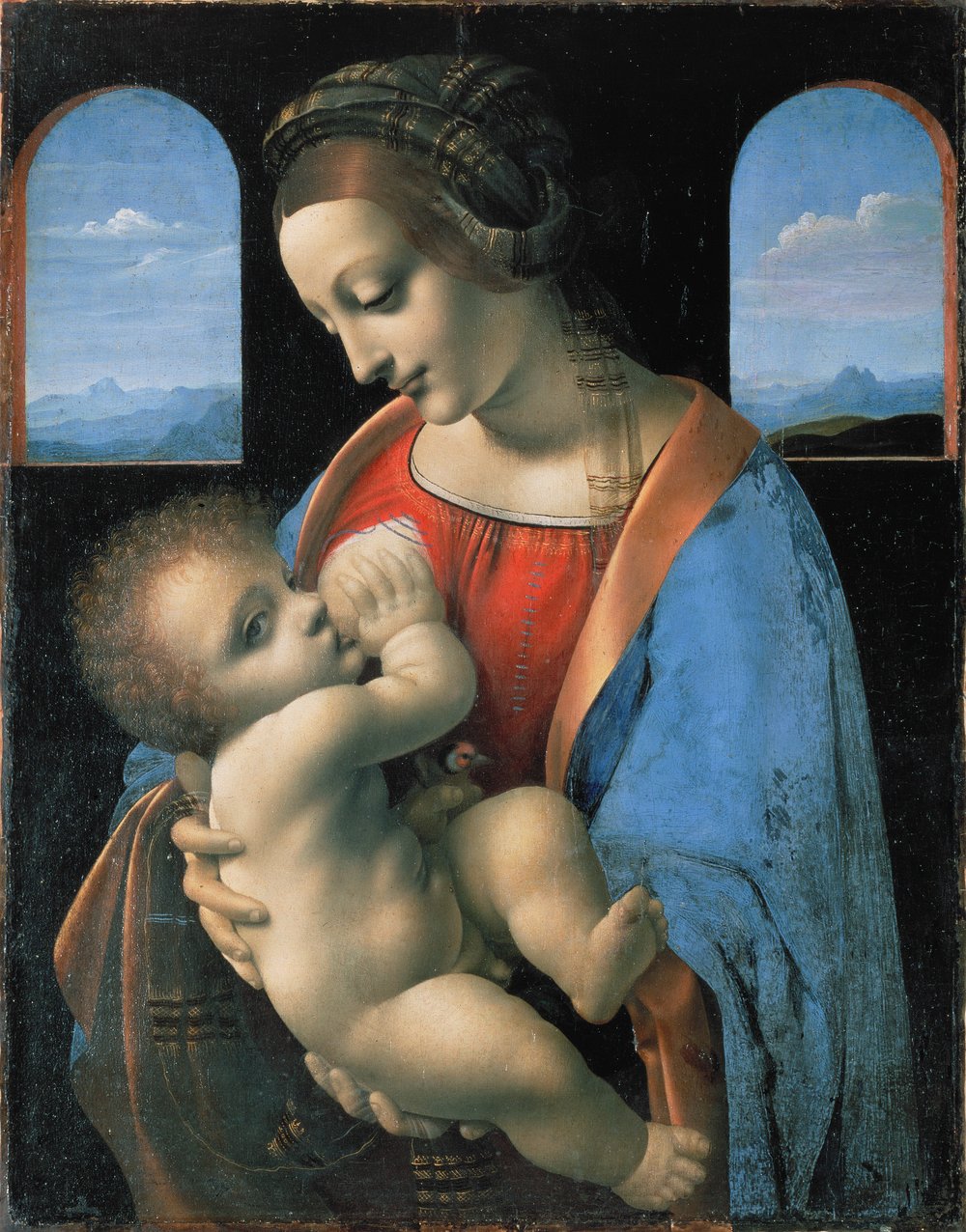 I do it too. We all do. We make our way to a great gallery, we queue, we pay (sometimes) to enter, we walk the long corridors, we spend half an hour eating over-priced cake and drinking average coffee – then we find ourselves in front of a masterpiece and spend 8 seconds reading the caption and 5 seconds looking at the painting. I watched this happen time and time again yesterday while filming at the magnificent Hermitage Museum in St Petersburg. It’s a palace of wonders – and may I add the cake and tea are of course actually delicious – but, as ever, I do think people maybe should see less and look more.

The painting I am talking about today is the Madonna and Child by Leonardo. It is also known as the Madonna Litta. Painted somewhere in the 1480s and 1490s, the director of the Hermitage, Professor Piotrovsky, told me when I saw him for a chat that this was the single most popular painting in the gallery. That statement alone is worth a pause – this is a gallery with Michelangelo, Raphael, Rembrandt and many, many more. But no, this – according to the Professor (who added that maybe there is a Rembrandt that is becoming more popular) – was a major star of the museum. So, there we were, filming it and, next to it, another Leonardo called the Benois Madonna. We were filming on a Monday when the gallery is closed to the public but, nevertheless, special tour groups came by in regular waves. And I didn’t see one person really stop and look at the work. Many certainly took snaps on their phones and I guess having ‘collected it’ like the cigarette cards of my youth, they moved on. So here’s my advice: ditch the guide and choose in advance 5 works and just look at them – but look properly, do some research in advance or bring notes with you. Too much work? Sounds like school? Not at all: isn’t it true of anything and everything that effort put in equals reward taken out? So let’s say you were one of yesterday’s sight-seers and you’d asked me what they should notice, what was interesting to know, about the Madonna Litta, what would I have replied?

First of all, I’d have mentioned that maybe it isn’t by Leonardo. There is dispute and debate about that but a consensus certainly exists that it is from his workshop and, just like a Damien Hirst work today, even if the work is made by others in the workshop, it still has the guiding hand of Leonardo – his idea, his planning, probably his outline drawing, and that makes it a Leonardo for many. Others certainly go further and discern his actual hand in the painting – and certainly it is a work to stare at and luxuriate in – irrespective of the percentage of it actually painted by Leonardo. I know that the distinguished scholar Martin Kemp thinks the skin is too polished and uniform and lacks the vitality of Leonardo (though he still calls it a “Leonardo work”) but I find it still extraordinary to look at. Look also at infant baby Jesus in his mother’s arms. You can feel the weight of the child in her hands – just imagine looking at a white canvas (or, more accurately, prepared panel) and trying to accomplish that illusion. I could go on but, no, you should just look for yourself – slowly and carefully. I think it’s wonderful.