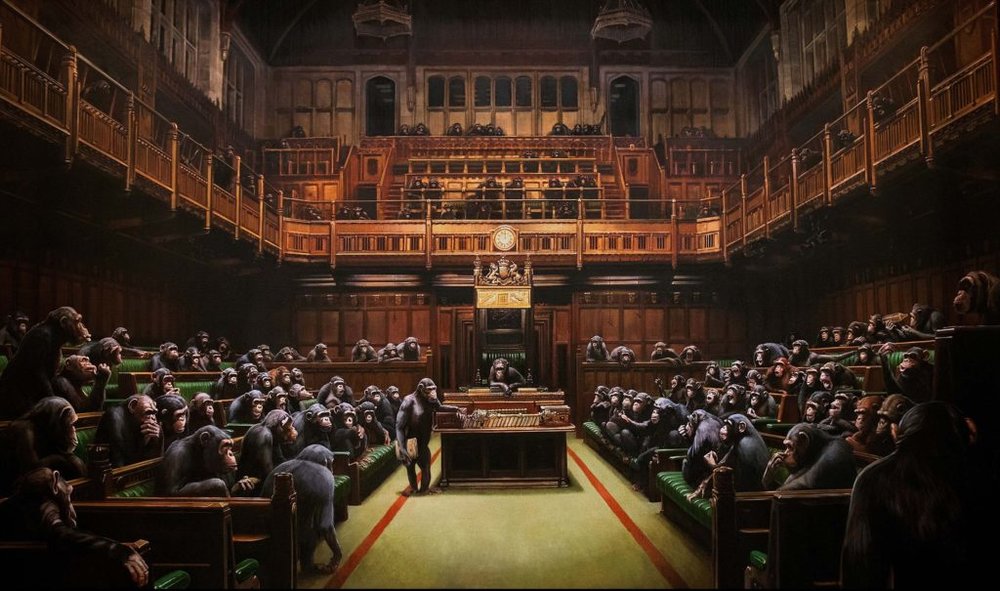 This week, we have invited Phil’s colleague Georgia to write about a favourite work of hers. This is her piece.

Bristol-based satirical artist Banksy is renowned worldwide for his instantly recognisable politically-charged street art but less known are his canvases. Devolved Parliament, which first appeared at the Banksy vs Bristol Museum exhibition ten years ago, is perhaps his most famous and it made headlines again last month (March 2019) when it went back on display to mark ‘Brexit Day.’

On 29th March, the day the British government had initially set for the UK to withdraw from the European Union, Devolved Parliament returned to the Bristol Museum. The double entendre title might at first suggest a reference to the devolution of political power to the countries of the UK but a brief glance at the painting indicates a more literal meaning. The piece shows a broad view of the House of Commons, with the Members of Parliament depicted devolved into apes. Its rehanging on this key date is a merciless dig at the UK Parliament’s chaotic handling of Brexit which has now been postponed again to the 31st October.

What is interesting about the depiction of the ape-politicians is that, far from appearing riotous, they actually seem rather well-behaved. For the most part they remain seated and attentive, stroking their chins thoughtfully. If you have seen footage of the House of Commons during a lively debate recently, you’ll be struck by how tame and civilised the monkeys seem by comparison. Presenting them as such seems to provoke exactly those kinds of comparisons – intentionally bringing to mind parliament’s disorderly proceedings and unruly behaviour by their absence from the painting.

The monkey is a recurring image in Banksy’s work, often imitating human behaviour in a crude modern take on singerie. The motif pokes fun at the misconception that a profound distinction exists between humans and animals reminding us that, for all our ideas of civilisation, we are perhaps merely overdeveloped apes. Many other associations come to mind: unruly behaviour, survival of the meanest, the mob mentality, Chuck Palahniuk’s idea of the does-as-he’s-told “space monkey”.

One key piece in which the monkey features heavily is Banksy’s 2002 commission Laugh Now, in which the primate stands upright wearing a sandwich board which reads “Laugh now, but one day we’ll be in charge.” Devolved Parliament is something of an epilogue to this now iconic image, which can be found plastered across buildings, posters and coffee cups the world over. It’s a glimpse of a dystopia in which that premonition has become scarily true. Indeed, at the time, Banksy dubbed the 2009 exhibition “My Vision of the Future.” By putting the canvas back on display, are Banksy and the Bristol Museum suggesting that dystopia is already upon us? Are the monkeys really in charge?

Such jibes are to be expected from a satirist like Banksy, but what really strikes me about Devolved Parliament is the artistry of it. At a staggering 4m wide and 2.5m high, the piece has all the drama, intense chiaroscuro and rich colouring of a classic masterpiece. In a similar vein to other contemporary artists like David Hockney, Banksy combines his command of oil paints with digital print. These striking contrasts at play in the composition of the work make the comedic juxtaposition at its heart even more powerful.

Satirising current events is hardly new territory for artists but by incorporating new technologies, popular culture and his signature searing sense of humour Banksy has rejuvenated the discipline for a new audience and a new 21st-century world. Devolved Parliament shows a side of him that is more technically ambitious than we might anticipate from someone who made his name in anonymous street art, yet it is every bit as astute, hilarious and ruthless as we have come to expect.