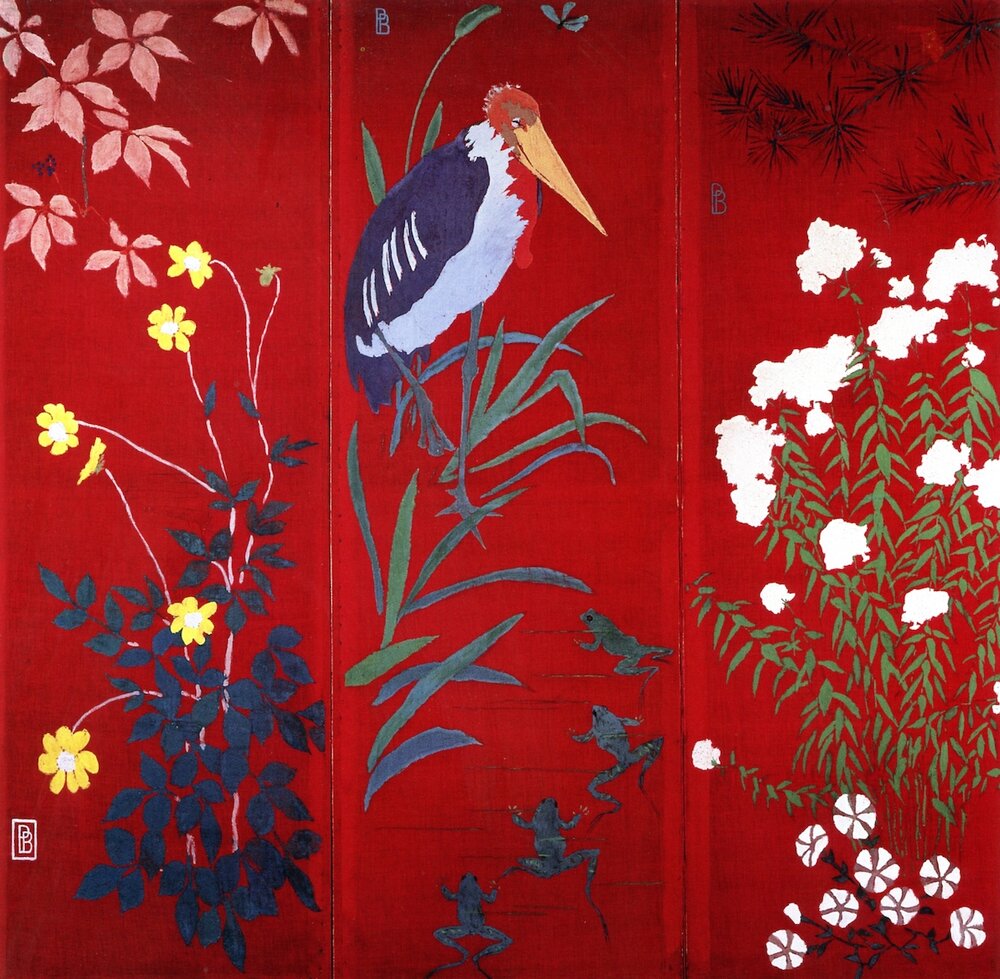 THE INTIMATE POETRY OF EVERYDAY LIFE

A look at the exhibition at The Phillips Collection, Washington DC October 26, 2019 – January 26, 2020
The incandescent colors — greens, yellows, blues, and reds — of late summer, broadly painted on the lid of a cigar box may not sound particularly radical in the Grand Scheme of Art. And yet the abstract sketch of a landscape that Paul Serusier brought back to Paris in the fall of 1888 — the harvest of a summer painting alongside Paul Gauguin in Brittany — was just that. The Talisman, as it came to be called, catalyzed the convictions of his fellow art students about what art could and should be. Liberated by the example and by the mentorship of the older artist, a small group of students already dissatisfied with their academic training were ready to throw off the age-old tradition of mimicking nature and instead to paint what they felt of it.

Gauguin’s advice to shape their art in the expressive, imaginative, and esoteric way of contemporary symbolist poets, musicians, and dramatists was transformative. Banding together under the obscure name The Nabis — the Hebrew/Arab word for prophet — the group consisted of Serusier, Pierre Bonnard, and Édouard Vuillard, along with Maurice Denis, Aristide Maillol, Paul Ranson, Ker-Xavier Roussel, and Felix Vallotton. While stylistically diverse, the Nabi were united by their conviction that in order to express the truth of their emotions on canvas the artist must simplify form and heighten color, in other words, exaggerate art’s artifice. The Nabi’s mission, which lasted through the 1890s, was to bridge the gap between art and life by making art an integral part of everyday life. They also sought to abolish the distinction between fine and applied art. So in addition to paintings, these artists produced ceramics, stained glass, folding screens, tapestry, furniture, fans, and lampshades. There are examples of these forms in this exhibition.

Drawn from a promised gift to The Phillips by Vicki and Roger Sant, Washington, DC art collectors, philanthropists, and influential patrons of the arts, the exhibition amounts to a celebration of Bonnard and Vuillard as more than half the works on display are by these two giants. Since the Phillips already has the largest collection of Bonnards in a public museum in the United States, this promised gift is, in the words of the Phillips Director, Dr. Dorothy Kosinski, “nothing short of transformational.” Although familiar with Pierre Bonnard’s work, I was stopped in my tracks by his five-foot square canvas, The Stork and Four Frogs (1889), at the entrance to the exhibition.

A blazing five-alarm manifesto for the new art, this three-panel decorative screen unites Eastern and Western aesthetics with the wisdom of an ancient folktale. First of all, the artist looked to Japanese woodblock prints and screens for the flat un-modulated color, asymmetrical composition, and botanical motifs. He was obviously enthralled by this art so much so that he was called “le Nabi très Japonard” (the ultra Japanese Nabi). Next, the unforgettable vermillion background was inspired by what Bonnard called “the magnificent example” of Gauguin, specifically his Vision After the Sermon which was on show in Paris in the same year. And finally, the subject of the screen is a fable of Aesop about the time when the nation of frogs petitioned Zeus to give them a king. The ruler of the gods put a stork in charge of the frogs. In Bonnard’s screen, the stork king looks down on the frogs. His face is impossible to read so his intention is ambiguous. We wonder if Zeus has given the frogs a good monarch, who looks only to the well-being of his subjects? Or a tyrant who thinks only of his own good, i.e., dinner?

Immediately to the left of the screen, there’s a small but important portrait of Vuillard’s mother in profile. Madame Vuillard is presented as a formidable figure deeply engaged in her work. As we learn from the catalog, to keep her family together after the death of her husband, Marie Vuillard started a corset and dressmaking shop in her dining room. She appears in her son’s paintings and photographs over 500 times throughout his career. Small wonder that he said “Ma Maman, c’est ma muse.” Along with his mother, the family business, seamstresses, and textiles were to become his favored motifs in the Nabi decade. There are seven intimate interiors by the painter in the next room, along with related works by the other Nabis. In these enchanting works, Vuillard turns the people in his life along with the patterned wallpaper, draperies, carpets, and clothing into decorative arrangements of color, pattern, and form. While his career lasted 40 years, the paintings from this period are considered by connoisseurs as his best work. Interior with Red Bed (1893) depicts the artist’s sister Marie’s preparation of the bedroom on her wedding night. The richly colored and intricately patterned composition is charged with resonate emotion for bride, mother, and artist (unseen). Marie married fellow Nabi Ker-Xavier Roussel, a close friend of her brother. Though the marriage would not be a happy one it gave Vuillard plenty of new material for his pictures.

In the next room, rivaling this work, aesthetically and emotionally, is In Front of the Tapestry: Misia and Thadée Natanson, Rue Saint-Florentin (1899) which depicts the apartment of the artist’s two primary patrons. Vuillard, who was smitten with Misia, paints the couple from behind, almost hiding them in the composition, whereas the smaller, lighter-colored figures in the very center of the picture appear to step forward from the background tapestry. Bonnard, Vuillard, and Vallotton, like the Impressionist generation before them, were especially drawn to the spectacle of modern life as it manifested itself in a bustling metropolis. The poet and art critic Charles Baudelaire had urged modern artists to become “flaneurs” — i.e., passionate observers of the world around them. To capture the energy of people in motion, the Nabis rendered figures broadly in silhouetted forms with exaggerated gestures and animated lines as in Felix Vallatton’s Passerby (1897), an approach that drew upon the 19th century Japanese ukiyo-e art (pictures of the floating world. Bonnard’s Nannies Promenade (1896) is an urbane, four-panel screen portraying the dynamic energy of the urban street scene in the Place de la Concorde. In a way, Bonnard was anticipating the moving pictures which were coming into being at this time.

Filling out the exhibition are two rooms devoted to the innovative techniques of Nabi printmaking and an adjacent room drawn from the Phillips’ permanent collection of works by artists who influenced the Nabi, such as Gauguin, Paul Cézanne, and Odilon Redon along with the stars of this show Bonnard and Vuillard. The richly-illustrated catalog, published by Rizzoli Electa, is edited by the curator of the exhibition, Elsa Smithgall. It features a conversation between the Sant’s and Dorothy Kosinski, as well as essays exploring the role of the Nabis in the early theory of modern art, the influence of Symbolist poetry and literature, and detailed analysis of selected paintings.

*Joseph R. Phelan is a Washington based author and teacher. He is the founding editor of Artcyclopedia.com, the fine art search engine. He has taught at the Catholic University of America and the University of Maryland University College.