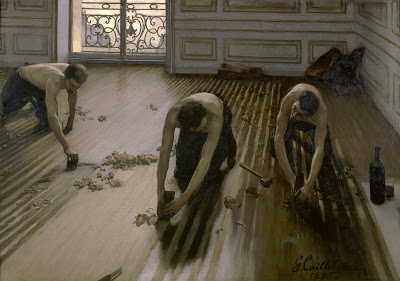 I have always loved this painting and a nice copy of it hangs above my desk at work. Caillebotte is less well-known than many of the other Impressionists / Realists of the late 19th century but he is personally one of my favourites.  It is strange really how an artist who exhibited at a good number of the famous ‘impressionist’ exhibitions has fallen slightly out of public awareness – even more so when one learns that his own art collection eventually (after much drama) formed a key part of the Musée d’Orsay’s own.

This particular painting is fascinating in a number of ways – the perspective, the lighting, the repeated motif of the curl are but three things to look at. Plus it is one of the first representations of an urban working class.  Paintings are open to interpretation and one argument states that a Parisian working man scraping down wooden floors would never be topless and that Caillebotte is alluding to his own sexual preferences by painting them as such. However, anyone who has been in Paris in the summer knows how hot it can be and perhaps they had just taken their shirts off. You decide. Mind you, almost nothing an artist does is an accident.  Certainly when he submitted this to the 1875 Salon it was rejected for its ‘vulgarity’.  A year later, Caillebotte placed it in the more welcoming arms of the 1876 exhibition of those we now call the Impressionists.

Caillebotte was lucky – his father, who died the previous year (1874), was wealthy and left Caillebotte very well off. The family home in which this painting is thought to have been set was clearly very comfortable.  Being well off allowed for a freedom of subject choice and workmen were as good a subject as the more traditional history or genre paintings. Caillebotte’s younger brother, who lived in the family home too, could also follow his interests and one of those was photography. One can sense the influence that this relatively new invention is having on an artist like Gustave Caillebotte.  He was fascinated by it and sought both to incorporate and respond to this new medium.

I love the painting personally for a few reasons: it feels like a genuine snapshot of ordinary workers, I find the craft of the workers and the craft of the artist equally impressive, and – frankly – because it reminds me of my own living room floor which I really must re-wax one of these days!