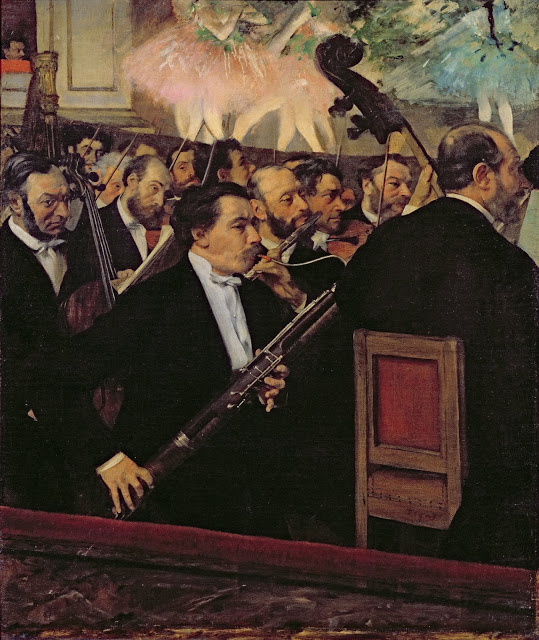 THE ORCHESTRA AT THE OPERA

This is a painting that contains many elements that I love: music, ballet, opera, real-life characters, mid-19th century France, theatre and, of course, art.  I was reminded of this painting recently when involved in the edit of our next film – Degas: Passion for Perfection.  Degas has always been the Impressionist that intrigued me the most. Somehow he is the most mysterious and a passing awareness of him would suggest he’s a man that likes ballerinas or racehorses but, as ever, there is so much more to any artist than the subject matter they may choose. Actually, a large proportion of his work is portraiture. This painting is in some ways no exception. The bassoonist at the art of the work is Désiré Dihau and indeed the majority of the musicians featured are actual friends and musicians. The configuration of the instrumentation makes little sense but the feeling of energy and confined space overrides that. You can sense the energy going into the music and what great fun it must have been to be in the audience.  Degas has brought the orchestra almost to the level of the stage. He hasn’t portrayed them as they would normally be – almost hidden below stage. He’s not interested in reality, he’s interested in what his painting suggests.

The ballerinas behind are almost an afterthought, but they are especially significant as they were the first picture of ballerinas that Degas did. Nowadays if he is known for anything it is that very subject matter and many paintings, pastels and indeed sculptures he did of ballerinas – not least behind stage in rehearsal rooms, overseen by tutors and mothers. I admire this painting for all the tricks Degas is using: look at those lines that force your eye from one character to the next. The line of the harp takes you down the shoulder of the bassoonist then up we go along the bassoon over the bassists’ shoulder to his instrument and its neck takes us to the headless ballerinas. A little head on the left stops us drifting out of frame and instead that head’s eyes bounce us back along the stage and round we go again.  The multicoloured tutus clash and contrast with the black of the orchestra and the brown furnishing of the opera house itself. Degas was in his mid thirties when he made this work and was a single, dedicated, complex man with an absolute passion. For him, the painting was unfinished, but the outbreak of the Franco-Prussian was what prevented him from completing it. I don’t see what he needed to change – it’s fabulous, brash, noisy and fun just the way it is.