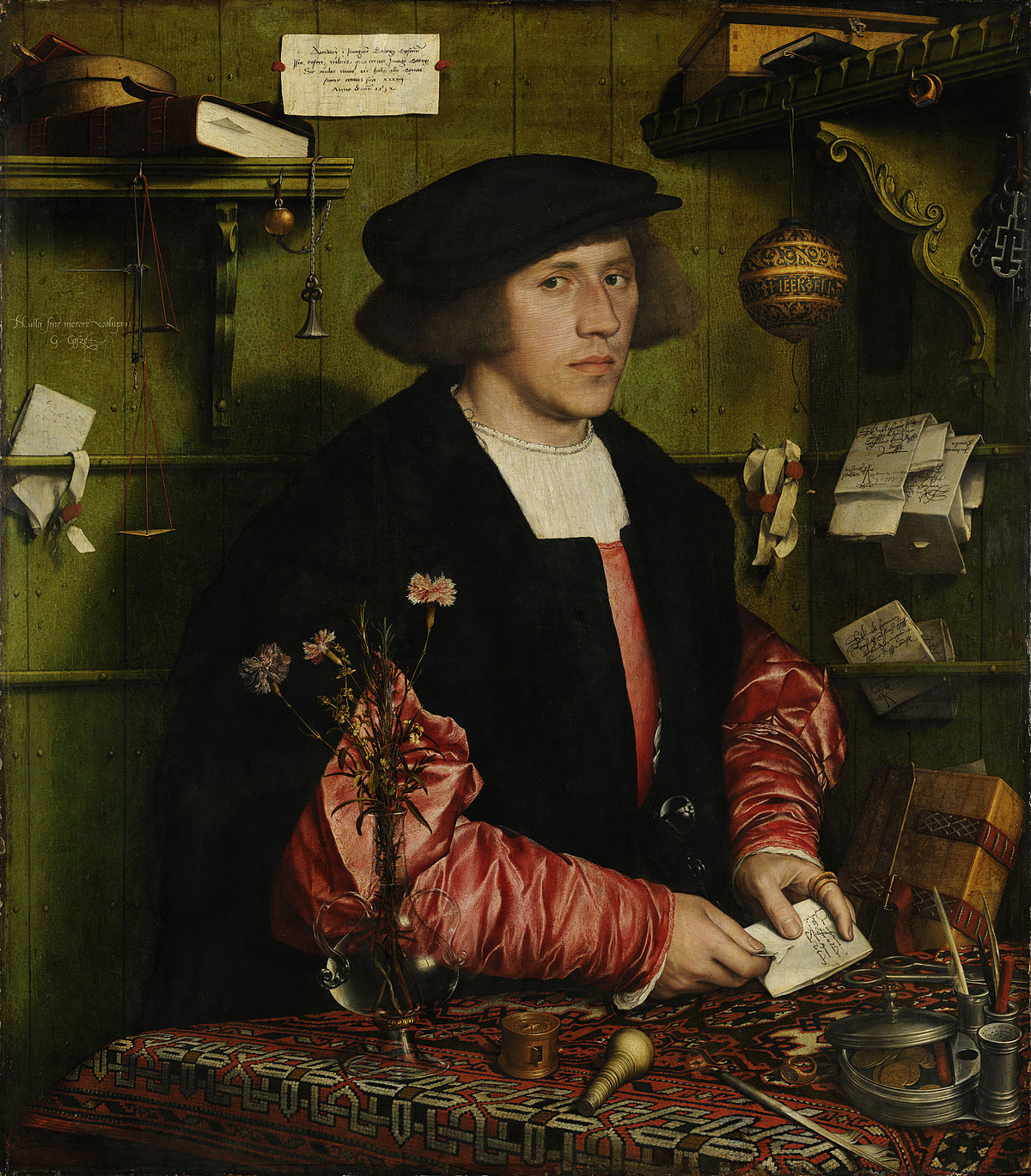 I would like to write about a painting by Hans Holbein (1497/98-1543) entitled Portrait of Georg Gisze painted in 1532. Hans Holbein was born in the imperial German city of Augsburg in Bavaria and died in London. Possibly he interests me because I too have a German/English background, but it is more likely that I appreciate him as an example of the fact that for centuries and, in spite of many wars, our relationship with the Continent has always been close and fruitful. Finally, I admire highly his skill and his penetrating grasp of the psychology of his sitters.

Studying his portraits and portrait sketches we not only see great beauty and amazing artistic skill but also come to comprehend the personality and psychology of his sitters. To begin with, however, we need to know a little about Holbein’s life and how he came to rise to be the painter of English kings and queens.

Holbein came from a family of painters. His father was a Late Gothic panel painter. As a young man Hans worked in Basle where he painted important portraits, religious works and murals. He became famous in 1523 by virtue of his portrait of the humanist Erasmus of Rotterdam, a great intellectual celebrity of the day. After travelling through Europe he eventually arrived in England in 1526 where he gained the patronage of Sir Thomas More, a very significant humanist, politician and courtier at the Tudor court, painting his portrait in 1527. More also obtained important commissions for him. Holbein returned to Basle in the summer of 1528 but returned to England in 1532.

Sir Thomas More had fallen from grace so Holbein found the new patrons he needed among the wealthy German merchants of the Steelyard which was an extensive area situated in the present City of London where they both lived and worked. This politically influential and wealthy German trade establishment, founded in the 13th century, took to Holbein and his first client was a merchant called George Gisze. Aged 34, he had lived in London since 1522 and was one of the Steelyard’s administrators. He commissioned this very large portrait.

Because the pink flowers, carnations and rosemary symbolize love and fidelity we can assume that he had it painted for his fiancée in Danzig, whom he married in 1535.

I love the complexity of this painting. To begin with his clothing. It is, at one and the same time, both plain and luxurious. His pink undergarment is of sumptuous silk, while his black overgarment is of a stark, sober black, as is his cap. In a painting of Jean de Dinteville, painted a year later, we see the same gleaming pink undergarment, only this time the black overgarment is lined with white fur. The same year Holbein painted a portrait of Robert Cheseman, again with the pink silk undergarment and a black surcoat lined with fur. The rich silk indicates that Gisze must have been very rich, but not of such social standing that he could allow himself fur on his outer garment. He also has two gold rings on his left index finger, which could be engagement rings. Surrounding him are the accoutrements of his trade, many of then pointing in his direction as if to reinforce how he is the centre of attraction. They are extremely realistically painted. His arms, covered in the luscious silk, form a diamond shape culminating in his mouth, which is nearly the same colour as the pink silk. His face, turned slightly to the left, expresses much about him. His chin is determined, while his lips are soft yet firm, perhaps even sensual but with a hint of hardness. He has a strong but fine nose, leading up to his expressive eyes. His eyes were probably brown, but they appear black in the painting and suggest wariness and more than a hint of sadness. He is clearly a serious young man of business who, as the flowers symbolize, may also become a loving and faithful husband. A personal motto (reading ‘No joy without sorrow’) is pinned on the wall behind his head. Maybe he is alluding to his missing his home and fiancée while he works abroad? Holbein does not flatter him nor does he stylize him. He has taken time to understand the character of this young man and present him as truthfully as he can.