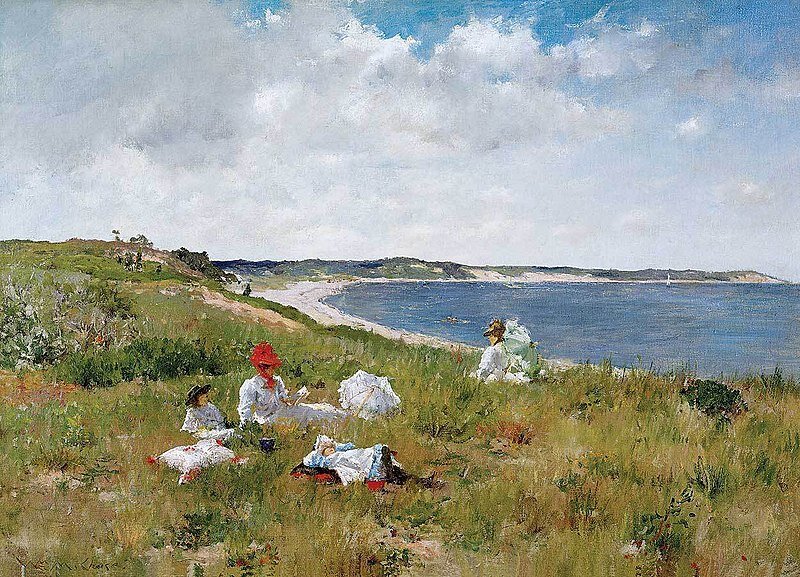 There are lots of reasons why I have chosen this painting. First of all, when you first looked at it, who did you think it was by? Did you immediately think of Merritt Chase or did Monet come to mind? Renoir maybe? Pissarro?

William Merritt Chase, like so many artists before him, had left his home (he was born in 1849 in Indiana) and travelled to Europe to the source of new painting, above all the revolutionary style of impressionism. He studied at the Academy of Fine Arts in Munich because (it is said) there were fewer distractions than Paris. Maybe, maybe not, but certainly he worked hard and by the time he returned to New York in 1878 he could be considered a leading artist of the new European-inspired American art movement.

We looked at this movement in our film The Artist’s Garden. One aspect that is so interesting to observe is how impressionism – in American hands – tells, unsurprisingly perhaps, a distinctly American story. Merritt Chase was a key part of it. This painting – Idle Hours – he painted in his mid-30s and is set not in Normandy or Brittany but on Long Island. At first glance you’d be hard pressed to see any difference. Merritt Chase led painting summer schools on Long Island throughout the 1890s and one can imagine, alongside him as he paints, 6 or 7 students also painting the same models lounging in the sun.

Look carefully and you can spot the artist’s tricks; the position of the models for instance subtly directs the watcher’s eye. A little circle, then the small umbrella taking your gaze to the girl on the right, who is facing up the beach, which is where you eye now travels, on that long curve and then out of the top right of the painting. That long visual exit adds a laziness to the scene; there is nothing urgent here. The spots of red and the black of the stockings, pot and cap are probably something you notice on the second, more careful look. Then finally perhaps one takes a closer look at the technique of the foliage and the distant, actually very cloudy, sky.

It is far, far from the Madding Crowd of New York or Boston – or indeed Paris or Munich. These are privileged women with time on their hands, and there is no man to be seen, unless we assume the sailors in the distant, barely noticeable boats are men. Merritt Chase is presenting a vision of life that was true and available to only a few in the post-Civil War United States. Much of European impressionism actually reflects a rapidly changing Europe for ordinary men and women. There is none of that here. That is no criticism – it is a lovely painting.

What adds poignancy is that I am looking at this painting at a time of a global pandemic when nothing is calm and peaceful anymore. While so many of us stay in our homes, longing for the day when it feels safe again to travel, be that holidaying with our loved ones, or simply to wander around without a mask. Imagine this scene with the characters in masks. Horrific really – though only 24 years later the so-called Spanish Flu (which killed as high as 50 million people internationally) also meant Americans were asked to wear masks. As with today, some did and some did not, risking arrest.

An artist like Merritt Chase sought to find beauty and peace around him, and reflect that in his artworks. He wanted to forget the horrors of the Civil War, and to put out of his mind the privations of urban and rural life in the USA – a USA that was rapidly changing with the arrival of millions of European migrants and refugees. Is Merritt Chase’s work thus of a man with his head in the proverbial sand or do we need art that is beautiful for beauty’s sake? What kind of art do we seek as we continue upon the long hard road of COVID-19?

Interestingly, our most popular film over the past few weeks has been another film that features gardens and impressionist paintings. Entitled Painting the Modern Garden: From Monet to Matisse, maybe its success shows – what Merritt Chase thought too – that we humans prefer to seek solace and escape in the beauty of nature, the electricity of colour, the sensation of sun, sea and sand. Maybe that’s what we all need right now. Maybe that’s what drew me back this week to look at Merritt Chase’s Idle Hours.