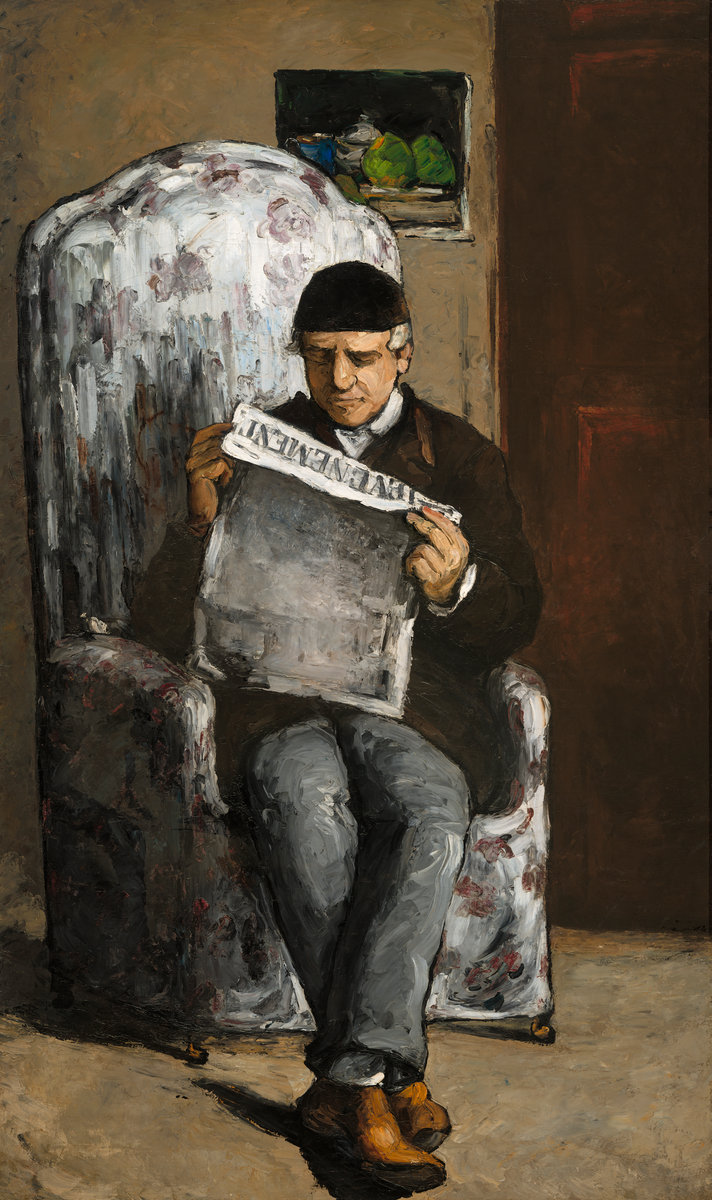 I have been here in Aix, this ‘Athens of the north’ with Paul Cézanne.

A portrait of his father in a big armchair comes over really well. The painting is light in tone; the look is very fine. The father has the air of a pope on his throne, if it weren’t for the newspaper that he’s reading.

The people of Aix still get on his nerves, they ask to come and see his painting so that they can rubbish it; and he has a good way of dealing with them. “Bugger off”, he says.

This latest blog post is a bit of a cheat – or cheek. I have been looking again at our Cézanne – Portraits of a Life film and I was particularly struck by how good Mary Morton (from the National Gallery of Art in Washington DC) was on this fascinating painting. Therefore I am going to ‘cut’ now to Mary:

It’s a very early portrait for Cézanne and it’s done in his style known as the ‘manière couillard’ which is roughly translated as the ‘ballsy manner’. Cézanne is using a palette knife for much of the composition but also wide brushes and really slathering on the paint in a very kind of physical, gestural way and I think he’s after an image that is quite powerful.

He wanted to make a statement certainly. He’s young, he’s a new to the Parisian art scene and he’s very ambitious.

The sitter is, of course, his father, Louis-Auguste Cézanne. He had started his business in hat-making in Aix and made quite a bit of money and then became a banker and was one of the richest men in town. You see him there sitting in his armchair, reading his newspaper, very much an image of a businessman of the day doing what a businessman would do, keeping up with the times.

The paper that he regularly read was one of wide circulation, particularly in the south of France, it was called ‘Le Siècle’, so it’s interesting that he’s not reading the paper that he normally would have read and there is this document, a letter from one of Cézanne’s friends, reporting that Cézanne changed late in the composition the masthead on this paper to ‘L’Événement’ which was a Parisian paper that Émile Zola had recently published a defence of the avant-garde and I think that, in a way, Cézanne is conflating the support of his friend Zola, who had defended him in this newspaper, with the support of his father. So it’s really kind of an homage to this moment in his career and it is an homage to his father. I think it’s quite respectful; he has a forceful presence in the picture frame and he’s brought up right against the picture plain so he’s almost out in your space. He’s quite an imposing figure.

There’s no doubt that at the inception of a picture like this he intended it for the (Annual Paris) Salon. The same year that he paints this painting he does one of his very good friend Achille Emperaire, which he actually submits to the Salon and it is rejected. So this painting doesn’t make it into the Salon until 1882 and it is, in fact, the first painting by Cézanne accepted at a Salon.

Thank you Mary – if you are ever in Washington DC, this is a must-see painting in a must-see gallery.