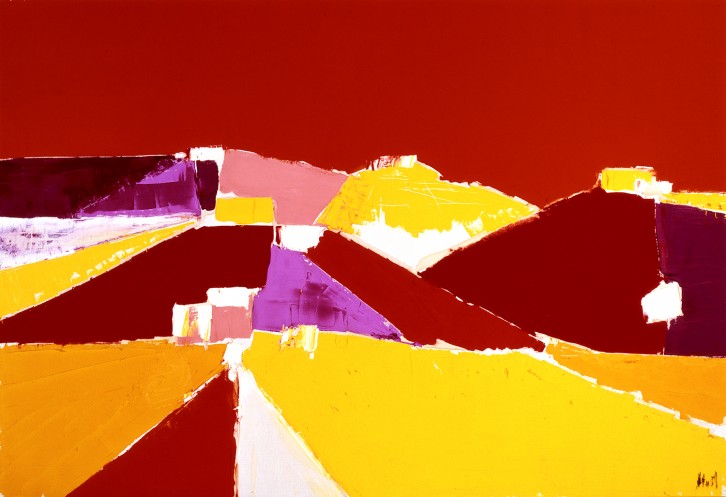 This week, I focus on an artist you may not have heard of even though one of his paintings sold a few months ago for 22 million US dollars. I was recommended to take a look at him by a knowledgeable friend of mine a couple of years ago and I admit it was an unfamiliar name to me too. The name of the artist: Nicolas de Staël. And the painting of his that I am bringing to your attention is called Agrigente, painted in 1953. It is currently at the Museum of Contemporary Art in Los Angeles.

Let’s start with who Nicolas was. I was recently filming for a forthcoming film (Easter in Art) in the fascinating city of St. Petersburg and that is Nicolas’s hometown. His military family were forced to flee because of the 1919 Russian Revolution, first to Poland and then, after his father and stepmother died, to Brussels. In 1932, aged 18, he began studying at the local Académie Royale des Beaux-Arts and within a few years he was exhibiting. He continued as an artist through the war – surviving tough times in Paris. But by the late 40’s and 50’s he had been noticed internationally. Depression, however, got the better of him on March 16th, 1955 when he committed suicide aged only 41.

Let’s now take a look at the painting. Let me start by acknowledging that abstract art is not always to my taste but if I had the chance I’d put plenty of de Staël’s works up in my house. That intrigues me: what is it about his art that ‘works’ for me while so much of abstract or contemporary art leaves me cold, sometimes even dismissive?

I was looking at some abstract art the other week by a few relatively well-known and respected artists and basically felt they actually couldn’t paint at all but somehow had managed to do enough to establish their names as artists that now folk would buy the work, no matter how the paint was plastered on the canvas. Of course, a lot of people in the art world would be shocked by such a declaration. It is much easier to pretend to see something profound in a painting that ordinary mortals simply don’t get – that way you appear knowing and special. While there is no reason that everyone should be moved by the same works, I certainly would argue that some abstract art is just randomly applied colours to canvas.

We do, of course, have to be careful not to dismiss all artists who work in this area. I adore Cézanne and Matisse, for example – indeed I think they are among the all-time greats. And I genuinely think de Staël follows in their footsteps. I love this painting: of course it not ‘realistic’ but nor is it so abstract that it contains no obvious sense of narrative. It is clearly a landscape and while these colours may not ever be seen in the real world in this way they still convey to me the sense of a sun-drenched, inviting, lyrical and timeless southern French countryside. As a keen runner in my spare time, I just want to get my running kit on and head off down that road and up and over those hills.

Like the masters before him – such as Monet, Picasso, da Vinci – de Staël was fascinated by colour theory and how our brains comprehend the different tones of reflected light. Look closely here at the shades of red, the hues of brown, the spaces left white, the shock of the yellow: it is gorgeous, sumptuous, life-affirming. Earth, sky, light – all is here to behold and examine and question. What do you think?