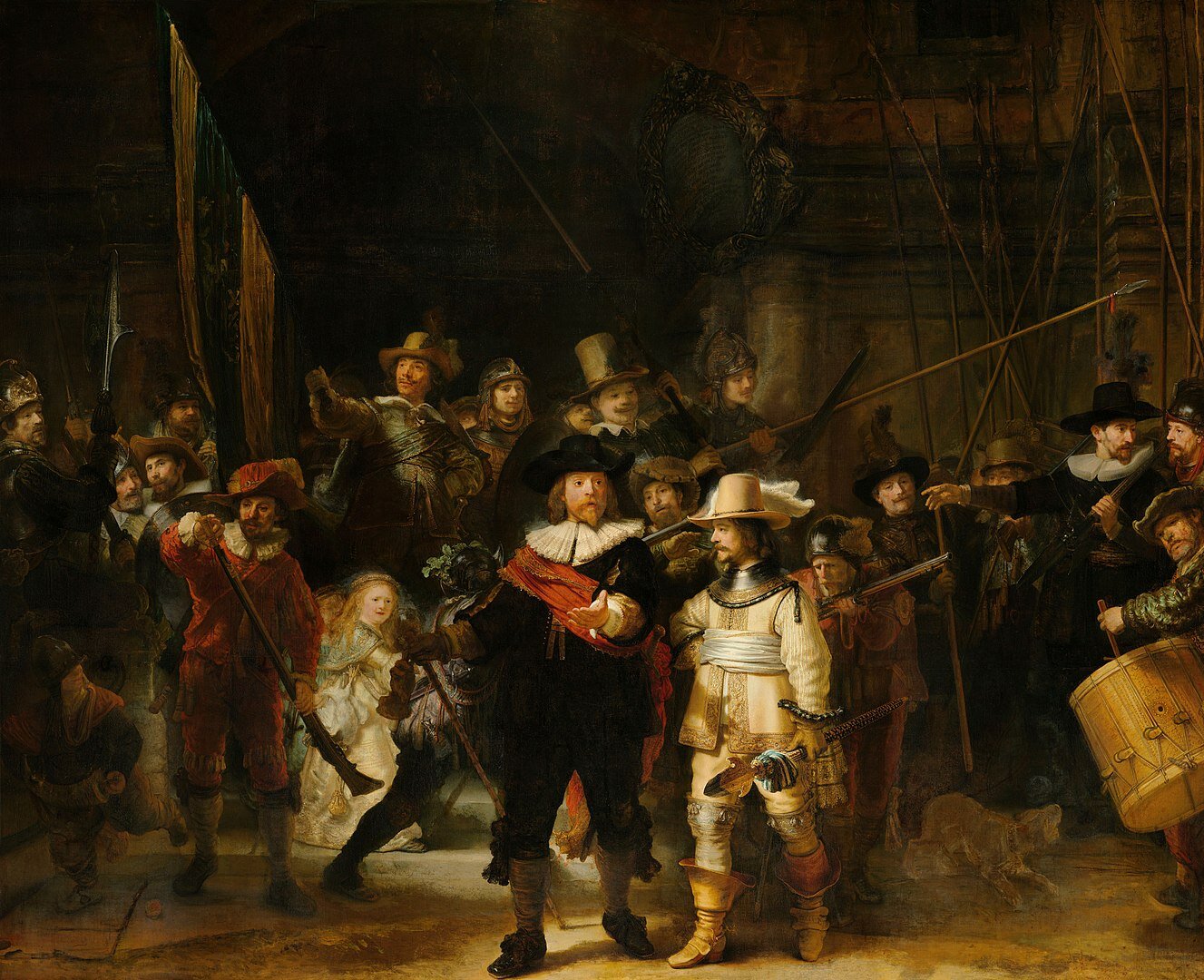 I make no excuse for returning to Rembrandt for my latest Painting of the Week. The so-called Night Watch is a wonderful work of art and infinitely interesting. Naturally it is best seen in situ – in the Rijksmuseum. It is too large to travel (3.6m by 4.4m) and I can’t imagine them lending it anyway. Most of us, however, will encounter it in an image that may be the size of the one you can see here. Such an image is tiny in comparison to the real thing and it is so easy to skim over the image and certainly miss many, many details. So, as always, I urge you to take a slow, careful look. Get a magnifying glass or even use the camera on your phone and enlarge the photos to see the details.

And when you do, the questions will arise.

Briefly, the history: it is called The Night Watch now but was painted in 1642 as The Company of Frans Banning Cocq and Willem van Ruytenburch. Cocq and Ruytenburgh are the two main characters at the front. They were part of a citizen militia in Amsterdam and wanted something bold to decorate their meeting hall. These militias were responsible for guarding city gates, officiating at royal marches, minor policing, and so on. Naturally, though, they had a high regard for themselves. The name plate on the painting shows that 18 of this militia paid to have their faces immortalized by the leading Dutch painter of the time. They paid 1600 florins in 1640 and Rembrandt must have felt top of the world. (It wasn’t to last).

The more you paid, the bigger your role and the more elaborate your costume. Whether this was Rembrandt’s idea or not, I don’t know, but this is product placement par excellence. I imagine each in turn coming to his studio to allow him to capture their resemblance which he then transferred in the most appropriate way possible to the canvas. Now, a more traditional approach would have been to just line them all up in two or three rows (like a school or college photo) but this is Rembrandt we are discussing and nothing could have been further from his intentions.

Look closely and there are some strange inclusions. The young girl, for example, in the unnatural light. What is she doing in the midst of all this noise and fuss? As an aside she has the face of Rembrandt’s wife. She must be a mascot and the chicken hanging from her arm is plausibly a pun on the name Cocq. Look at the muskets – in various stages of use. And that jumbled mass of pikes, suggesting a slightly amateur, hurried nature of these civilian-soldiers. A little like Dad’s Army perhaps? Some characters are beautifully dressed and centre-stage; others are barely visible. And look carefully – you might even see Rembrandt himself peeking through the crowd… (At the back, one eye visible). It’s a noisy picture too – drums, shouting, clanking and scraping. It’s fantastic: so full of life, humour and drama. Take a step back for a second and remember that this began as a blank canvas, some brushes, some pigments and oil.

Our re-release of our film on Rembrandt brings back to mind a riveting painting by this Dutch master of art. Indeed it was the image of the exhibition on which we based the film and the image we used for our poster. Take a moment to really look at it: before you read on. Look carefully for thirty seconds, a minute maybe. Try to take in the extraordinary achievement in oil paints that Rembrandt achieves here. The depiction of this illustriously-clad man and woman is both a technical masterpiece, showcasing Rembrandt’s signature use of oil paint in thick, sculpted layers, and a sensitive rendering of a remarkably intimate moment, made all the more so by the mystery of its composition.

A true innovator of the medium, Rembrandt used paint almost as if he were sculpting. It’s three-dimensional. We can show you this in the film – but I’d urge anyone in Amsterdam to visit the Rijksmuseum to see it up close. Moulding, building, scratching and smearing, he pushed for new ways of creating detail and depth, beautifully displayed here in the couple’s richly coloured garments. The exquisite detail of the man’s sleeve for instance has been created with weighty dabs of paint, accentuated with the visceral scratches of the artist’s pallet knife.

The juxtaposition of those heavy, sumptuous garments with such a delicate and intimate embrace is a part of what makes the painting so enchanting. The viewer is, on the one hand, confronted with the refinement and modesty of a happy and clearly wealthy couple. On the other hand, the placement of the man’s hand on the woman’s breast – or, perhaps more accurately, over her heart, plus the darkness within which they are shrouded and the fact they are looking neither at each other nor at the viewer, all suggest this is a private moment not intended to be on display. The image is intimate, voyeuristic and beguiling all at the same time.

Part of the pleasure of paintings – and why it always help to know something about the artist and his or her period – is the often inevitable mystery that is associated with a work. Surely our appreciation of The Jewish Bride is accentuated by the sense of thrill and enchantment caused by the painting’s enigmatic status. Its original title, the identity of its sitters and the context under which it was created have long since fallen into an unknowable obscurity. Such obscurity, however, has spurred exciting speculation…

In the 19th-century an art critic dubbed the hitherto unnamed painting The Jewish Bride, believing it depicted a wealthy Jewish man bestowing jewels upon his daughter for her wedding. Though that interpretation has fallen out of fashion, as today’s art historians claim the image most certainly depicts a romantic couple but not necessarily a Jewish couple, the nickname has stuck.

The most popular theory today is that the painting depicts the Old Testament figures of Isaac and Rebecca. This is supported by an earlier drawing by Rembrandt (below) explicitly denoting the biblical couple, with which The Jewish Bride shares many similarities. Having ventured to the city of Gerar, the married couple Isaac and Rebecca pretended to be brother and sister for fear Isaac would be murdered out of jealousy for Rebecca’s incomparable beauty. The drawing captures the moment in which they are discovered by the king Abimelech, barely visible in the top right corner. With Abimelech omitted and the couple brought to the forefront of The Jewish Bride, their love and not the drama of the story becomes the focal point of the painting.

Given the voyeuristic nature of The Jewish Bride, many have speculated that the threat posed by Abimelech is not so absent as it might at first seem. Intoxicated by the secret romance and beauty of the subjects, have we the viewer become the prying eyes of Gerar?

Whatever the subject matter, it is a wonderful painting of a couple who once lived (even if only in Rembrandt’s imagination) and in this gentle moment are seeming to express their love for one another. Do visit our website for more information about the film and to see one or two clips from it. Also, this and other posters are available to purchase.