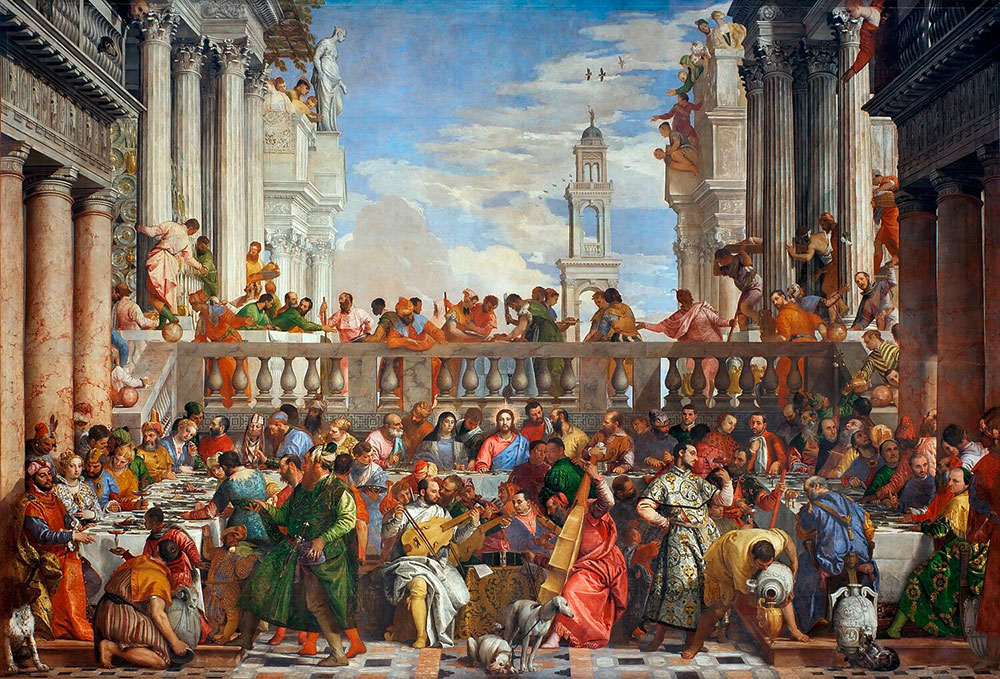 THE WEDDING FEAST AT CANA

The other day, while recording my upcoming podcast series with my pal Laura, she mentioned a painting in the Louvre which I had no recollection of. She pointed out that it is in the same room as the Mona Lisa and that it is absolutely massive. I’m not one to feel embarrassed at not remembering a painting and I told her I had to look this one up.  And I’ll be honest: even when I saw it in some of my reference books, it didn’t resonate. I simply had never come across it before.

The artist Veronese (1528 – 1588) sits with Titian and Tintoretto as one of the three great Venetian artists of the 16th century. He is known for his large-scale paintings – often for walls and ceilings. The Wedding Feast at Cana is one such painting. It was commissioned by the Benedictine monks at the monastery of San Giorgio Maggiore who wanted to decorate their refectory wall with a painting of the sumptuous feast that Christ is reported to have attended at Cana. It is there that, famously, Christ turned water into wine. A miracle that many have wished they could replicate in the centuries thereafter…

The Benedictine monks lived on the island opposite Saint Mark’s, and this was at a time when Venice was an extremely wealthy empire. Hence the commissioning of great artworks. It was an empire based on its sea-faring expertise and its trading acumen. That vast income helped to build what is still today one of the most beautiful cities in Europe.

In the painting, Galilee has become an Italian Renaissance townscape at the heart of which we see a very active and crowded wedding feast under way. Christ naturally sits at the centre alongside his mother and his disciples. Nearby sit Benedictine monks and local nobility. Many are no doubt portraits of actual people. The choice of depicting this miracle may owe something to Venice’s own experiences with wine and water. Throughout history water has been known to cause illness and people have chosen to drink beer or wine instead. Venice, as a small flat island with only sea-water canals, had a particular problem accessing fresh water and relied on collecting rainwater. Food, at the same time, again as throughout history, was a demonstration of wealth. The vast percentage of the world’s population were focused on the cultivation and preparation of food – and to have a lavish feast showed the world you were rich beyond most people’s dreams. Thus, the monks might have been trying to communicate the luxury that would come in Christ’s brotherhood. Veronese, I suspect, was also communicating the wealth of his native state.

Look again at the position and role of Christ. He seems almost incidental. Veronese seems almost more preoccupied with reflecting Venetian life and demonstrating what he and his studio were capable of. Look at the costumes carefully, the food, the perspectives, the faces. It is beautifully crafted. Look at the hustle and bustle of the servants he has clearly depicted in the background. Some of these servants – and maybe other spectators – look down from balconies, staircases and galleries in awe and excitement. There’s an energy to this painting which the monks may not have asked for, but Veronese couldn’t resist adding.  These monks were expected to live much of their lives in silent contemplation, but look also at how Veronese has added musicians to the scene. As we showed in our film Vermeer and Music artists knew that just depicting instruments gave spectators a sub-conscious soundtrack to a painting. Again, it all adds to the energy of the work.

This was a Venice that considered itself one of the great empires, but like all empires it faced an inevitable decline. The wealth that it had accumulated through a virtual monopoly on spices was coming to an end. A long decline was now setting in. The final act were the military campaigns of Napoleon at the end of the 1700s. When Napoleon conquered, he brought behind him a huge train to not only support his military ambitions but his civilian ones too. That included art collectors – or, perhaps more accurately, thieves. They stole whatever they could. This painting – having been painted on a canvas (indeed at 10 x 7 metres it is one of the largest works ever painted on a canvas) was one of those that was packaged up and shipped back to France where it has graced the Louvre ever since.